Mariana Trench - The Deepest part of the Earth

While thousands of mountain climbers scaled to the highest point of the Earth, Mount Everest, only a few could descend it to the deepest part of the Earth, Mariana Trench. Many different ecosystems may be found in the area surrounding the trench. 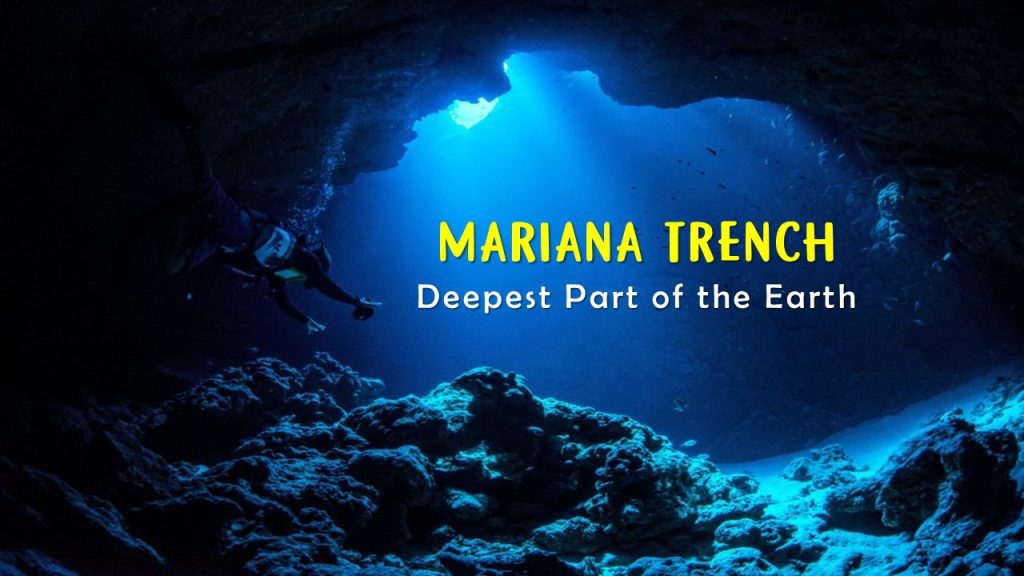 The Mariana Trench is more than five times the length of the Grand Canyon, at 1,580 miles (2,542 kilometers). The narrow trench, on the other hand, is just 43 miles (69 kilometers) broad on average.

●⫸ Where is Mariana Trench?

The Mariana Trench is a crescent-shaped rift in the Earth’s crust that stretches for more than 1,500 miles (2,550 kilometers) and is on average 43 miles (69 kilometers) wide. It’s about 124 miles (200 kilometers) east of the Mariana Islands in the western Pacific, east of the Philippines.

The deepest part of the Earth is at a distance of about 200 miles (322 kilometers) southwest of the US territory of Guam. With an estimated age of 180 million years, the trench is said to be one of the world’s oldest seabeds.

●⫸ What is the depth of the Mariana Trench?

The Mariana Trench was initially explored in 1875 as part of the first worldwide oceanographic trip by the British ship H.M.S. Challenger. Using a weighted-sounding rope, the Challenger scientists measured a depth of 4,475 fathoms (about five miles or eight kilometers). With an echo-sounder, the British ship H.M.S. Challenger II returned to the area in 1951 and measured a depth of about 7 miles (11 kilometers).

The Challenger Deep is the deepest location in the ocean, located at the southern end of the Mariana Trench (also known as the Marianas Trench). It’s impossible to tell how deep it is from the surface, although recent estimates differ by fewer than 1,000 feet (305 meters).

The Challenger Deep was measured at 36,070 feet (10,994 meters) in 2010 by the National Oceanic and Atmospheric Administration using sound pulses delivered across the water during a survey (NOAA).

The Mariana Trench runs along to the Mariana Islands, which are archipelago. The islands, which are the highest part of the younger and lighter plate, evolved as a geologic counterpoint to plate collisions, arcing upward due to friction and volcanic uprise.

The Challenger Deep is made up of three tiny basins, or “pools,” each measuring between 6 to 10 kilometers (3.7 to 6.2 miles) in length. The road to Challenger Deep is hardly a pleasant stroll through Midtown, but it is as deep as this trip across Manhattan is lengthy.

It’s a journey into total darkness and shattering depths. To go to the bottom of this deadly record-breaking depth to the brink of humanity’s ability to survive, it would have to be spanned 49 times. The pressure exerted by an ocean at Challenger Deep is more than 1,071 times that felt at sea level.

●⫸ Why is Mariana Trench so deep?

A deep trench arises above the bend in the sinking crust where the two pieces of crust join. The Pacific Ocean crust is bending beneath the Philippine crust in this case. Where it dips into the trench, the Pacific crust, commonly known as a tectonic plate, is around 180 million years old. In comparison to the Pacific plate, the Philippine plate is younger and smaller.

The plates collide at different speeds along their curved border, but the average relative motion is in the tens of millimeters each year. Because the Pacific Plate’s journey into the mantle is not smooth and uniform, earthquakes occur often at this plate border. Instead, the plates are normally stuck with building pressure, but with abrupt slippage, as the plates travel a few millimeters to a few meters at a period.

Vibrations are created as the plates shift, and these vibrations propagate through the Earth’s crust as earthquake waves.

●⫸ The unique world of the Mariana Trench

As a result, portions of the seafloor beneath the Arctic Ocean are closer to the Earth’s center than the Mariana Trench.

The water pressure on the trench floor is more than 8 tonnes per square inch, smashing everything in its path (703 kilograms per square meter). This is the equivalent of 50 jumbo planes piled on top of one person or 1,000 times the pressure at sea level.

The Mariana Islands are formed by a series of volcanoes that rise above the ocean waves and reflect the Mariana Trench‘s crescent-shaped arc. Surrounding the islands are a slew of strange undersea volcanoes.

Scientists discovered a lake of molten sulfur 1,345 feet (410 meters) below the ocean surface at the Daikoku undersea volcano, something is never seen before on Earth. It’s almost probable that more species will be discovered in the trench as further missions study it.

●⫸ Can the mysteries of Mariana Trench be unfolded?

In these extreme settings, recent research missions have uncovered a remarkable diversity of species. Animals living at the Mariana Trench‘s lowest depths must adapt to utter darkness and severe pressure.

Because the Mariana Trench is so distant from the shore, there is a scarcity of food. Dead plankton sinking from the top must drop thousands of feet to reach Challenger Deep, and leaves, coconuts, and trees seldom make it to the bottom of the trench.

Instead, some microorganisms use substances like methane or sulfur, while others devour marine life at the bottom of the food chain. Xenophyophores, amphipods, and tiny sea cucumbers are the three most frequent creatures found near the Mariana Trench‘s bottom (holothurians).

In mud taken from the Challenger Deep, scientists discovered more than 200 distinct microorganisms. A deceptively weak-looking fish, on the other hand, is not only at home here, but also one of the region’s top predators. Scientists reported collecting specimens of the Mariana snailfish, a unique organism that dwells at a depth of roughly 26,200 feet, in 2017. (8,000 m).

The snailfish’s little, pink, and scaleless body does not appear to be capable of living in such a harsh environment, yet this fish is full of surprises, according to recent research. The animal appears to be the dominant species in this habitat, diving deeper than any other fish and taking advantage of the lack of competition by devouring the trench’s abundant invertebrate food.

Because the deepest part of the Earth, Mariana Trench receives no sunshine, you may anticipate the water to be cold. You’d be correct in your assumption. The temperature of the water there is usually around 34 to 39 degrees Fahrenheit. However, it’s also startling how hot the water may become.

The trench is riddled with hydrothermal vents. At 700 degrees Fahrenheit, the water that pours out of those vents would scorch anyone – but don’t worry, anyone who wasn’t in a robust vessel would be crushed instantly by the incredible pressure. The water that emerges is also responsible for releasing a large number of minerals that are necessary for the survival of the lifeforms that exist below.

●⫸ Has anyone been to the bottom of Mariana Trench?

The Mariana Trench, the deepest part of the Earth is engulfed in constant darkness because of its tremendous depth, and the temperature is just a few degrees above freezing. The water pressure at the bottom of the tunnel is a mind-boggling eight tonnes per square inch—roughly a thousand times the normal air pressure at sea level. The pressure rises as you go deeper.

Humans plunged into the Challenger Deep for the first and only time more than 50 years ago. In a bathyscaphe called the Trieste, Jacques Piccard and Navy Lt. Don Walsh achieved this aim in 1960.

Scientists have argued whether life could live under such severe pressure before Piccard and Walsh’s historic dive. The Trieste’s floodlight, however, lit a creature Piccard mistook for a flatfish at the bottom, a scene Piccard would later describe with glee in a book about his travels.

The next visitor arrived in 2012, more than 50 years later, when James Cameron, a filmmaker and science fiction fan, solo dived to the Challenger Deep in a submarine he created. Cameron was allowed to stay there for three hours. And, of course, being a Hollywood director, he recorded video and snapped several photographs. However, the severe forces took their toll on his equipment. Batteries ran out, sonar stopped working, and some of his ship’s thrusters failed, making it difficult to navigate.

Victor Vescovo, an explorer and businessman, broke the world record for the deepest dive by diving 35,853 feet (10,927 meters) into the Pacific Ocean. He discovered beautiful stone formations, strange animals, and the ever-present mark of humans — plastic — at the very bottom.

Only two humans have ever successfully reached the bottom of Challenger Deep, the planet’s lowest point near the Mariana Trench‘s southern end. Don Walsh, an oceanographer, was the first to successfully descend into the trench in 1960, reaching a depth of 35,814 feet (10,916 m). He traveled alongside Jacques Piccard, a Swiss oceanographer, and engineer

The deepest part of the Earth is yet to explore more secrets. Scientists are still trying to unfold the Mysteries of the Mariana Trench. Many more people are trying to plunge into the darkness of the Challenger Deep and explore the world deep down yet very less attempts have been successful.

The mystery and attraction of the trench have produced numerous fanciful descriptions of what may be going on below. “Meg,” by New York Times bestselling novelist Steve Alten, is one such story. In the novel, the protagonist, Jonas Taylor, is investigating the trench when he stumbles upon the Carcharodon megalodon, a purportedly long-extinct predator.

The megalodon was a 20-ton dinosaur that could easily take down a T-Rex. There are future possibilities to gather more pieces of information about Mariana Trench is on its way to success. Researchers are still discovering how life exists at the deepest part of the Earth after discovering life at the highest point of the Earth.